A real need exists for television producers to develop media that provide educational benefits and suitable for young Thai viewers. Careful research should be utilized in the production process to make sure that the viewers learn from the media and transfer the knowledge in to the classroom as well as in their daily lives. This paper presents topics of literature review about children’s educational media, knowledge transfer, and sociomathematical norms. Then it provides a background to Thai children’s media and a design of math educational animation series for Thai elementary students. The design includes: characters design, setting, and plot. 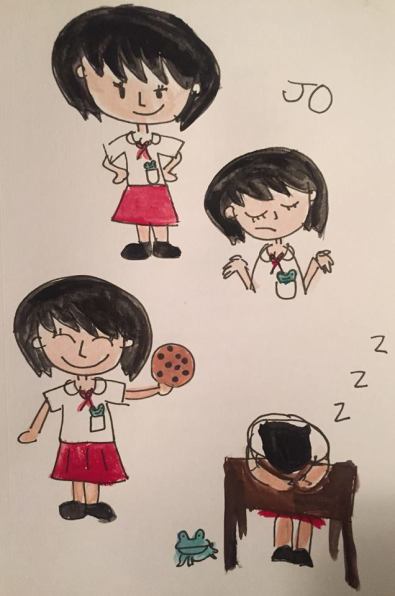 Posted on December 16, 2015February 18, 2016 Posted in Conference Papers, Toolkits for EducatorsLeave a comment

Compassion and Empathy through Inventions: GoGo Board Toolkit for 7-10 years old

GoGo board toolkit is a hardware-embedded curriculum designed to teach children aged 7-10 years old (grade 2-5) the concept of compassion and empathy through inventions. The toolkit is inspired by stories that adults read out loud to their loved ones. Many storybooks are interactive but not so many engender proactive behaviors from the young readers. Storybooks in GoGo Board toolkit aims to help young children observe and understand the problems of others. With support from adults, children can construct original inventions that help others solve their problems using GoGo Board, scrap or prototype materials, and their imagination. The main objective is to inspire children to be active social inventors who can see the problems of others or themselves and be eager to solve them.

The GoGo Board toolkit is comprised of four main objects: 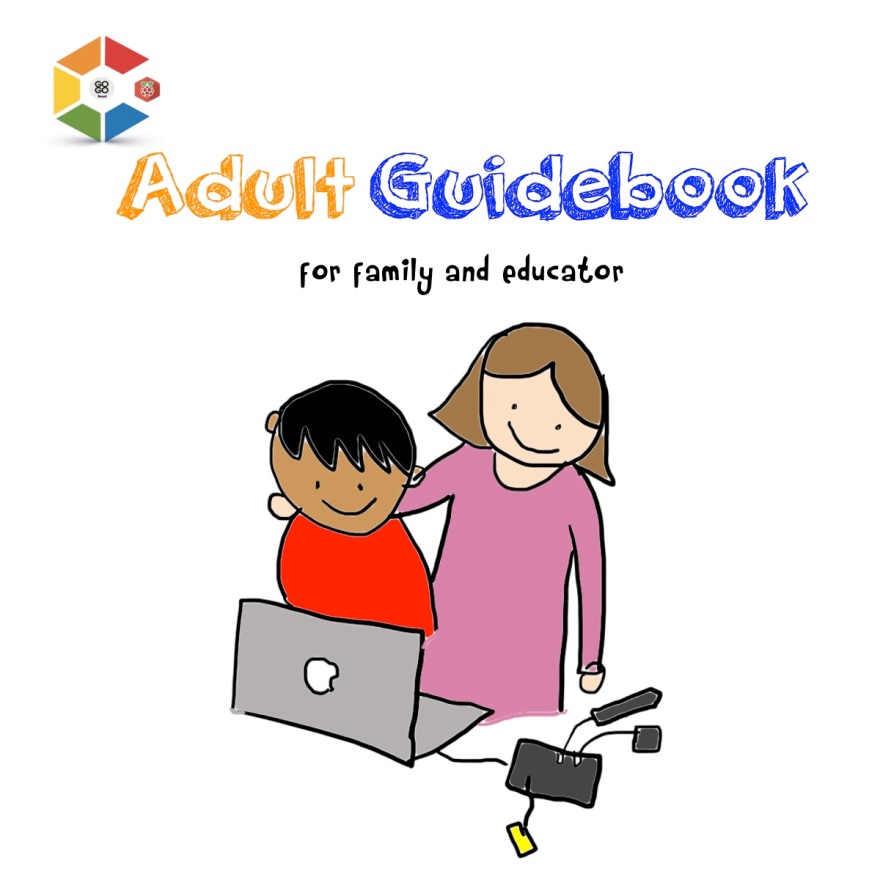 2. “Tommy and the Inventor” storybook (printed and/or digital) for adults to read out loud to children. The book helps children to understand different kind of sensors by inviting them to help the main character by choosing the right sensors. At the end of the book, children are encouraged to write their own stories. See how it works HERE

3. “I am an Inventor: Family Edition,” or a creator storybook (printed) guides the children to invent for people in their families. It’s a combination of: (1) story book, (2) drawing and coloring book, and (3) basic guidelines for using GoGo Board. It allows the children to personalize their inventions and ask them to write problem statements to solve the given problems. The book encourages children to start programming with GoGo Board, create prototypes of automatic devices, and test their inventions out. Adult guidance is highly encouraged.

4. Blank book (printed and/or digital) for the children to create their own narratives. Children can write, draw, or animate original stories from their own experience, imagination, or even stories from others. The stories must include the problem that they want to solve. Then they will build automatic devices using GoGo Board to solve the particular problems. 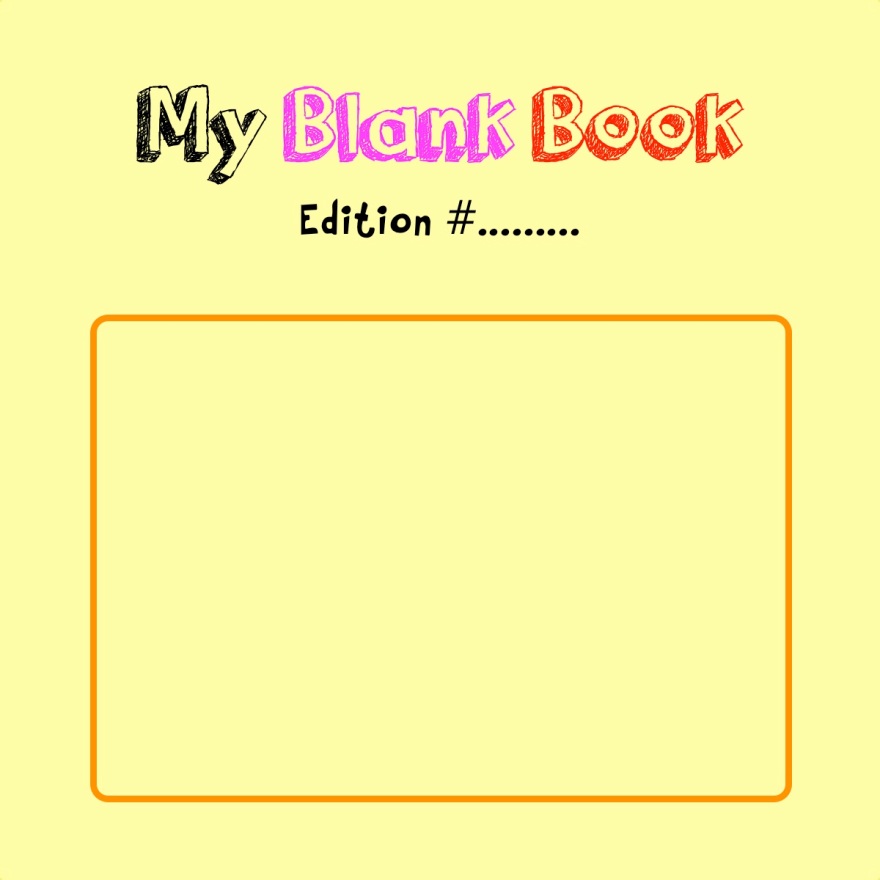 Video of our current project:

LittleBuilders is a social enterprise that aims to disrupt Thai education by employing constructionist design paradigms and human-centered design processes in at-risk formal and informal schools to foster a grit and growth mindset. We believe that constructing is a valuable learning process for the students; “children don’t get ideas; they make ideas” (Kafai & Resnick, 1996). Little Builders was first established in early 2014 by a group of recent graduates from various backgrounds but a common goal of shifting the Thai classroom from instructionist to constructionist systems, where students can work on their own meaningful project, learn at their own pace, and at the same time create a community of learners. Through our two years of commitment, Little Builders has received a grant from Thai Social Enterprise Office and currently has 7 core team members, over 100 active volunteers, and 533 supporters.

Little Builder’s first project was piloted at Janusz Korczak School, an informal school for HIV+, immigrant, low-income, and street children in Slum Klong Teoi with 22 students and 8 volunteers. We began by teaching simple circuitry and using a motor to develop low-cost racing cars from recycled milk cartons. We captured students’ full attention. Students connected the circuits by themselves and assembled the car within the end of the period just to be able to race with their friends. They said that it felt more like a playground than a classroom. The same lesson was organized in several foundations and informal schools in Bangkok. 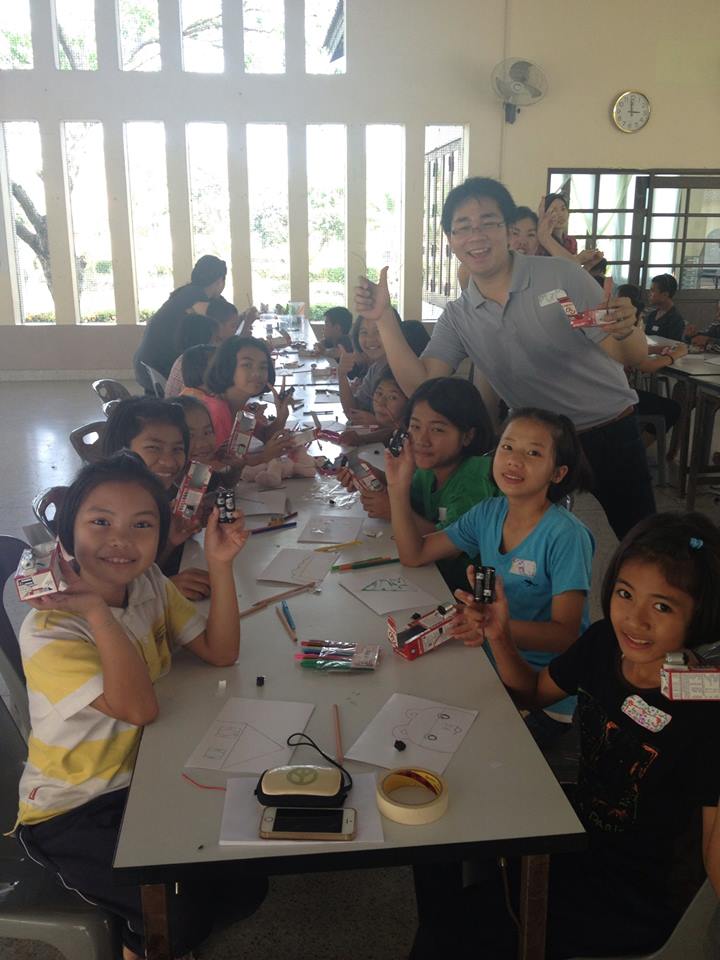 The next phase of development was at Baantawanmai Foundation, a foster foundation for Thai narcotic at-risk children. There were seventy 9-14 years old participants and almost thirty volunteers. We combined HCD process into students’ creations. We started by letting students find their own problems or needs in their own community. They came up with a host of problems. The library was too loud because it is located next to a music room; the decomposing plant and fish caused foul odor from the pond; there were pests in the bathroom; the local farm was too big which took too long to water. They ideated solutions, and developed quick prototypes from scrap materials then presented in front of the whole community. Two ideas were selected to be built by the students and volunteers during Builder Day.

Together, we designed and created an irrigation system covering an acre, using 300 meters of piping system and almost a thousand sprinklers. The water was supplied by automatic reciprocating pumps, creatively made by modifying salvaged bicycle parts. The pump can either supply the irrigation system directly or fill up a water storage tank for later use. The younger participants also learned the concept of art and chemistry by creating pest repellent candles to solve the problem of pest control in the 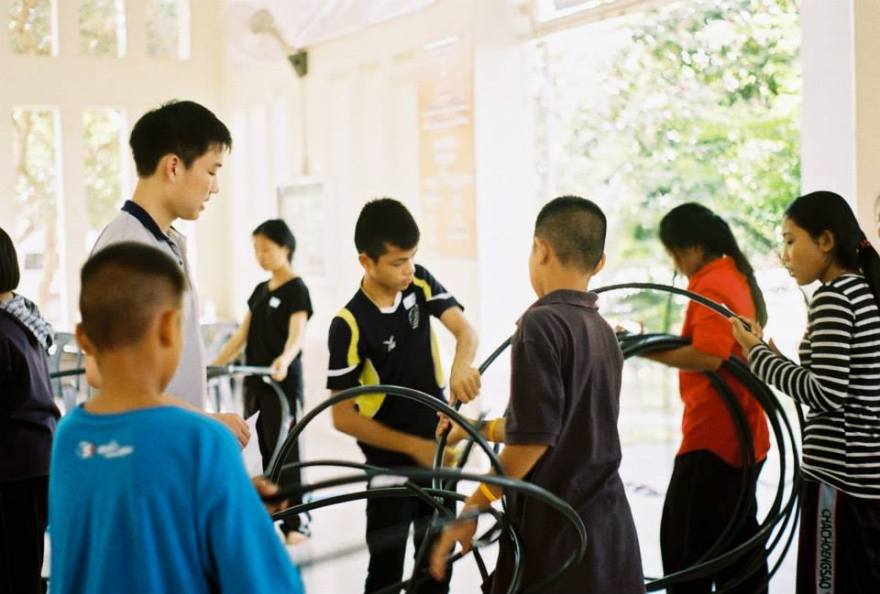 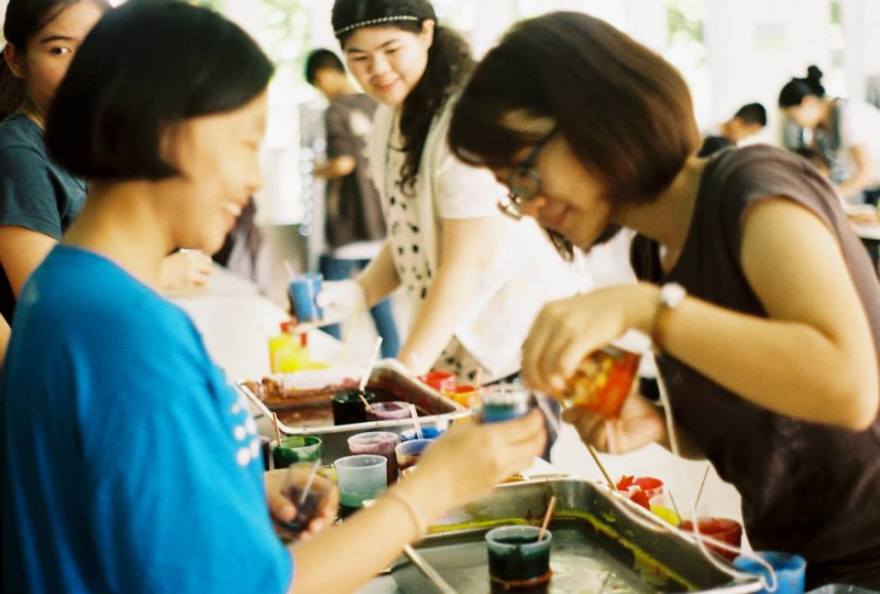 Seeing the problem with sustainability in running constructionist projects, we seek ways to integrate Little Builders in to Thai formal schools and provide professional development for teachers at the same time. We will be initiating our project at Wat Pak Bor School (an urban school under Department of Education Bangkok Metropolitan administration) from November 16, 2015 – February 8, 2016. We received strong support from the school’s principal, authorizing eighth grade students to participate in our program.

The students will be using HCD processes to design and build constructionist projects for themselves or people in their community. The program will start off with ice breaking and team building activities, then a full day of overview in HCD processes through activities of building small projects. After giving the students an overview of constructionist projects and HCD, the students will come up with their own meaningful project on Empathy & Define Day. Facilitators will train the students on interview methods then let them go out to interview and observe the community and be immersed with their target users to figure out the users’ needs (define). We will continue to work on the rest of the HCD processes (ideate, prototype, and test) the following week. Once an idea is formulated, the students will start building on Builder Day. The building process will take up to 2 weeks. Since the students will be presenting and exhibiting their Little Builders projects to the public audience, we will also coach them on public speaking skills. The last day of the project is the Showcase Day, where we hope to see the students taking ownership of their projects. 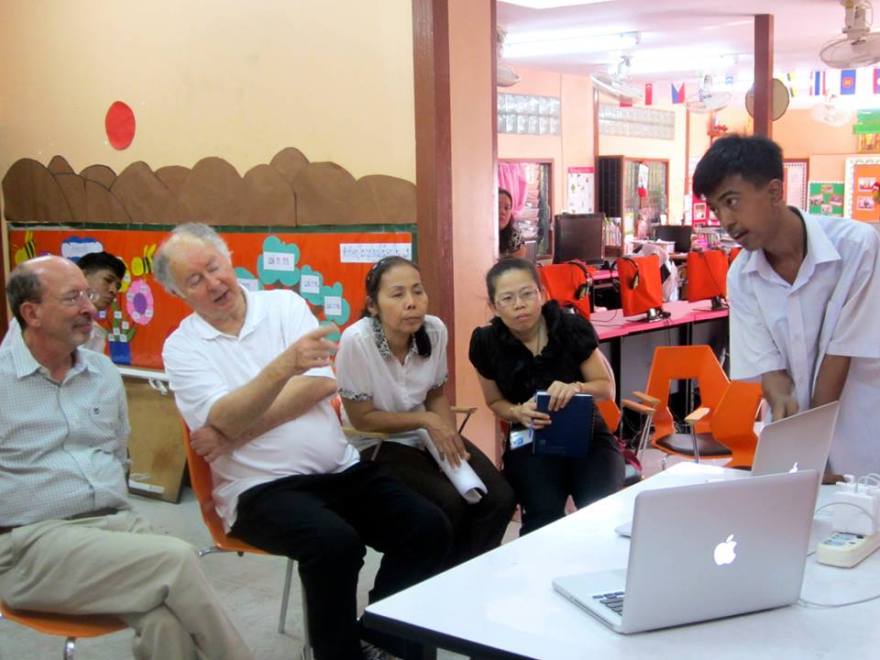 In November 2013, I taught a semester-long Design and Create Technology course for Thai at-risk students at the Janusz Korczak School, an informal school located in the biggest slum in Thailand where students had unique situation concerning their health, learning disabilities, and developmental variations. Eight out of fourteen students were diagnosed as HIV+. The twelve students were classified as affected by poverty came from various backgrounds: children from low-income families, street children, children of incarcerated parents, children who survived human trafficking and children of immigrant Cambodian workers.

As a member of facilitating team applied constructionist design paradigms to teach students (who had little to no background in technology) to design and create media through PowToon and Scratch software. We observed how students interacted with design software and what they learned in the process of making their own meaningful media projects. Unlike many deficit-model interventions that took place with at-risk children, students at Janusz Korczak School were taught to emphasize design, creativity, and higher order level computer skills. The result proved that more than half of the participants, if given the opportunity, would be self-motivated learners and do very well when they were taught in a way that tailored to their interests. The study also explored the reasons why the Design and Create Technology course was unsuccessful in particular group of students.

The paper was presented at FabLearn 2015 Conference at Stanford University on September 26, 2015. Writing in study format, the first case is a story of Fah who is a novice in technology. From Fah, we learned about the importance of working on a meaningful project. Despite her barrier in languages and computer proficiency, Fah was able to express herself through her own media creation. Along the way, she was able to pick up and make sense of the language she had never known before. The second case is about “From a Consumer to a Producer of Media,” Bank taught us about the importance of social component. From a student who was dubbed as Eeyore (because hardly interacted with others), he gained confidence and became an expert amongst other students. The last case study is about the unsuccessful cases, we learned about the importance of support and management. Six students lost their interest because we did not give them enough support since the beginning. They did not have a project topic that interested them and eventually felt that they could not relate to the course and faded.

To watch the video of my presentation, click the link below: